One night six years ago I went to bed after the Breaking Bad finale ‘Felina’ knowing Jess Pinkman was free. There was a level of warmth and enduring satisfaction that reminded me Jesse was always the heart of the show, taking the mantle from Bryan Cranston’s iconic Walter White, who was dragged into the abyss by the show’s coda.

Jesse’s ironically instead found redemption as the show progressed though his was a tortured arc riddle with loss and pain. But he found some reprieve at the end. Jesse (portrayed so devastatingly by Aaron Paul) drives into the night at the end of ‘Felina’ screaming like a mad man, after a season and a half of being held captive as a meth cook and tortured by neo-nazi drug dealers. I’ll spare the uninitiated the details of that finale but it felt oh so complete.

Thus, the apprehension following the announcement of a Breaking Bad movie centered on Jesse was justified. It was ripe for an “absolutely nobody” meme if failed. We live in an IP world and the film eventually titled ‘El Camino: A Breaking Bad Movie’ would do well to justify its existence. The good news is that it does, not by contriving a whole new adventure but by engaging in minimalism that comes from treating the film as an epilogue, albeit one that runs for two hours.

Directed by Vince Gilligan with the kind of measured flair that made me wish I saw this in a cinema, El Camino is more concerned with mood and it’s subject’s psyche than plot. The plot itself is fairly simple giving Jesse a simple motivation. He may be free from his torment but he is declared a wanted man and has to find a way to evade police to get safely out of Albuquerque New Mexico and start a new life.

The film’s title comes from the car Jesse escaped in, which belonged to his psychopathic captor Todd (Jess Plemons). He heads straight for the home of Skinny Pete (Charles Baker) and Badger (Matthew Lee Jones), who are the first of the many familiar faces we meet. Jesse is grizzled, weathered and broken by his time as a slave for neo-Nazis. I was surprised by how scared up he looked given I’ve yet to find time to revisit the Breaking Bad universe.

The plot then begins to play out as a series of problem-solving exercises that run over the course of two days. First, it’s about disposing of the El Camino then it’s about finding money to pay for the services of Ed the disappearer (played with the charming cool we will remember the dearly departed Robert Forster for) who helped both Walter White and Saul Goodman during the Breaking Bad series. 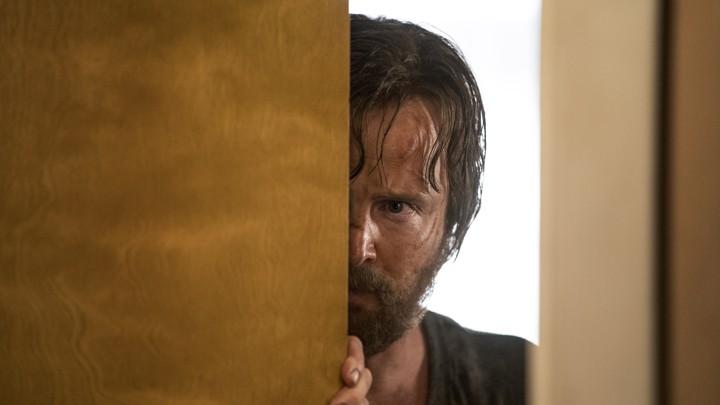 There a lot of ghosts along the way that Jesse has to confront. The script is great in the way it amplifies little details in the series (details I’m yet to verify even featured). Our survivor’s needs take him to the home of Todd and he eventually also gets in touch with his parents in a touching moment, all in pursuit of the cash he needs to pay Ed. One other encounter serves up some exhilarating moments and reminds us that Gilligan is also taking quiet inspiration from westerns.

Jesse is so young but his life is riddled with regret, which is ultimately what ‘El Camino’ is about. This leans into the near-perfect use of flashbacks, which reveal to us unknown details of Jesse’s torture by the neo-nazis explaining to us how he basically became Reek. The flashbacks, sewn with sentiment and well-earned fan service, also cut to the core of the theme of what could have been for our lead.

The flashback is also almost a character in ‘El Camino’, changing the way it interacts with Jesse as his circumstances change. They offer solutions at one point and healing the next giving him the drive to take each step forward as the stakes heighten. Most importantly, they remind him that, at the very least, his turbulent time in the criminal underworld will forever haunt. They’ll forever be as real as the scars on his face and torso.

The scars will forever be with him but at least he can start over. That’s one of the lessons the flashbacks gift us. When the goodbye comes, it’s as tender as you would expect. Gilligan gives us a lesson on how to handle a beloved character (I’m looking at you ‘Last Blood’).

‘EL Camino’, whilst slick in its brilliant thrills and western vibes, didn’t feel overly heavy. Gilligan is trying to make ‘Unforgiven’ though he owes some debt to it. One may even describe its pacing and plotting as lacking ambition and too tethered to TV. Then there’s the issue of the actors maybe being too old (and overweight) for the story. But by God did it feel like perfection. We walk away knowing Jesse hadn’t just found freedom. He had found healing too.