So, Liam Neeson dug a deep hole for himself ahead of the release of his latest film ‘Cold Pursuit’. Friends and colleagues have had to assure me that it will all be alright in the end for Neeson, that tanking the publicity for ‘Cold Pursuit’ and admitting to a racist blood lust wouldn’t drown out one of my favorite actors.

The stench of Neeson’s admissions was tempered by a good film – right in my wheelhouse. Norwegian director Hans Petter Moland is adapting his own 2014 film ‘In Order of Disappearance’ and if the mordant wit and boisterous eruptions of violence on show in ‘Cold Pursuit’ are anything to go by, then visiting the original some ways down the line will be well worth my time.

‘Cold Pursuit’, as advertised, is about a man in a ski resort town, Neeson’s Nels Coxman, who goes on the warpath after his son Kyle (Micheál Richardson) is murdered. Nels doesn’t have a special set of skills. He is a humble snowplow operator who operates with the diligence of a neurosurgeon to keep things moving in the town. The Citizen of the Year honor that we see Nels receive early on is all but the exclamation point on the most content years of his life.

Everything flips with the death of his son. In the torturous days that follow the tragedy, Nels and his wife Grace (Laura Dern) are worn down by the realization they did not know their son. There is a moment Grace is overcome by the despair when she browses through her deceased son’s Facebook and realizes the extent to which he was a stranger. “What did you talk about during your hunting trips,” Grace asks Nels at a point, simmering with contempt. “Hunting,” her husband insipidly replies.

Nels is in much darker territory following the death, driven to the brink of suicide. In a call back to the brilliant ‘The Grey’, he liquors up and sticks the barrel of a hunting rifle in his mouth, ready to end it all. But renewed purpose lies behind the corner – literally. His son’s friend at the airport where they worked shows up bloodied and reveals that Kyle was mixed up in a drug smuggling deal gone wrong. The movie changes gears as Nels ventures into the criminal underworld, armed with a sawn-off rifle, where violent delights await in his hunt for the man responsible for Kyle’s murder.

Moland and screenwriter Frank Baldwin expand the story at just the right time. Nels has rattled off about three kills when the criminal architecture of the area starts to take shape. We get more intimate with Trevor Calcote aka Viking, the leader of the cartel that iced Nels’ son. Viking, well realized by Tom Bateman, is a stickler for good grammar, has an eye for great suits and sports callous regard for human life. That his presumably poisonous marriage to the feisty Aya (Julia Jones) didn’t last is no surprise but he has a healthy, if not bizarre, commitment to his clever son (Nicholas Holmes) who is later dragged into the action.

There is an interesting thread about father-son relationships, albeit one the film seldom has interest in exploring beyond the borders of violence. The mayhem Nels causes sparks a gang war between the Vikings gang and a Native American cartel. Native American faction’s leader, White Bull (Tom Jackson) is soon shoved into the same grief-marked territory as Nels when Viking kills his son. Viking, in turn, decides to go after Viking’s young son in retribution.

The idea of fathers responding to tragedy involving sons with violence is interesting to think about. I can’t say the film really puts much stock really conveying this vicious cycle. You also have to look real hard to see any proper character development beyond men merely embracing a violent streak. White Bull, for example, is afforded one other layer; one that has to do with the appropriation and commercialization Native American culture – a bit of a cliché for a film that purports to be edgy. 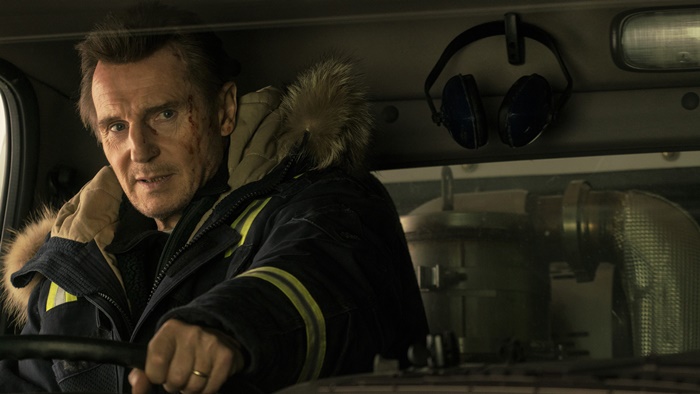 That doesn’t stop ‘Cold Pursuit’ from being a win. Moland and screenwriter Frank Baldwin have brewed a cauldron with brilliant black humor bubbling beneath the story. The morbid amusement manifests in moments like the ballsy manner Kyle’s corpse is dropped off by gangsters or when Nels and Grace visit the morgue to identify Kyle’s body, where we stand and wait uncomfortably as an attendant slowly cranks up the corpse into frame in a sequence Edgar Wright would have loved.

‘Cold Pursuit’ revels in its body count (and criminal nicknames) even if doesn’t get too graphic. Kills are played for laughs whether they happen onscreen or offscreen; whether Nels is strangling the life out of a man or Viking is having his henchmen draw curtains around unsuspecting prey. I can’t seem to remember if we get some gratuitous blood spatter on snow but we do get a sequence in a bridal shop which ends in white gowns sprayed in red. There are a million more kills so rest assured I haven’t ruined the fun.

Visually and sometimes tonally, ‘Cold Pursuit owes a debt to westerns with the large swathes of snow replacing arid plains. Hell, there are even Native Americans fighting white men for good measure. At the centre is the reticent hero who chooses to walk the path of vengeance as a lone ranger in search of his warped version of justice.

‘Cold Pursuit’ may lack any serious depth as it treats the idea of revenge like an itch that needs scratching. But its irreverent sensibilities appealed to me.  It’s far from the perfect version of what it could have been, sacrificing character for violence but I’m just glad Neeson being attached to this meant I got to see this off-kilter piece of work on the big screen.