When did Africans start to lose faith in Africa? How long did it take the buoyant flames of colonialism to be quenched by the decadence of the elite and an underestimation of neocolonialism? Probably in the mid-’60s, and judging by the golden age of Senegalese cinema, this sentiment became truly entrenched in the ‘70s; with films from the like of Ousmane Sembene’s Xala, or more to the point, Djibril Diop Mambety’s 1973 film, Touki Bouki.

Muse on the fine details of Touki Bouki and one comes to realise it paints a bleak picture of the lives of the average African. On the surface, Touki Bouki it is about a young couple looking to make enough money to travel to France, where they feel the grass is definitely greener. It’s hard to blame them, the struggle is real. A dissection of the subtext brings to the fore that idea of ambivalence my sociology lecturers drummed home. The confluence of the rural and urban are clear in various totems and eccentric visuals served up by Mambety. 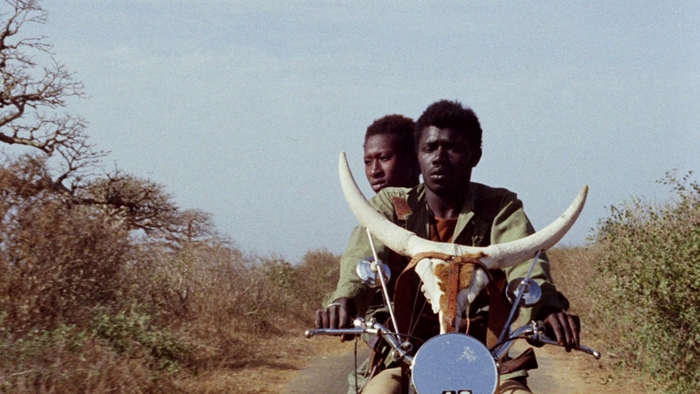 On a deeper level, Mambety gives us a whiff of the vice grip of neocolonialism. The easy comparison to Mambety, for a someone like myself now digging into the history of African cinema, Mambety is Sembene; with the latter doing little to suffer the West and its influences in his films. His radical realist approach was an urgent call to arms of all Africans and rightfully so. Mambety wields a certain poetic flair in Touki Bouki and communicates with a more subtle experimental visual language. There is nice piece exploring the visual language of African cinema per the approaches of Sembene and Mambety but that’s for another day.

Touki Bouki brings to mind the gloomy gag that encapsulates Africa’s catch 22, and what has been described by some as our colonial inheritance of corruption and exploitation. Say a ship docks at the Tema Harbour, or any coastal point in Ghana (or probably the continent), offering a free trip to the developed West. Thousands, if not hundreds of thousands, will flock to it. We were stacked like sacks of cocoa and shipped across worlds in perilous conditions during the slave trade centuries ago. Today, we need no transactional middlemen. We do the honours ourselves and make our way to slave away in the land of the white man at harrowing risk.

When we do make it, we scamper for crumbs. Consider the story of Nigerians in Italy who volunteer to sweep the streets of Rome for 10 to 20 Euros a day. That’s decent money for them in the grand scheme of things and it puts in perspective the standard of living in their homeland; blighted poverty and layered in poor education, access to health care, malnutrition and unemployment. Africa’s youth population is racing for the skies and is expected to reach over 830 million by 2050. So the estimates that indicate that half a million Africans migrated to Europe between 2013 and 2016, a significant amount of them at grave risk, is only going to rise. Nkrumah felt Africa was enough for Africa but as things stand, he’ll be turning in his grave and picking his eye sockets.

Much like the earlier cruel joke, Mambety presents a similar scenario for his central characters. The couple; Mory, a deadbeat whose only possession of value seems to be a motorbike with an ox skull mounted on the handlebars, and Anta, a disenchanted University student. They steal and con their way to some luxury items that get them closer to the apparent come-up they desire. But as Touki Bouki nears its denouement; as the horns of ships heading to France begin to blow and “Paris Paris” continues to loop on the soundtrack like a demon tormenting our characters, we realise the grass on the other side may be greener, but the dump of thorny weeds will still be portion of the folk from Africa.

This hits home when we get our first shot of white people, some snobby looking Frenchmen in haste to leave Senegal. One of them describes the country as barren, both intellectually and physically. The people are described as unrefined and there is a disdain for their culture. “African art is a joke made up by journalists in need of a copy,” one French person says. So where does this leave our couple? They make their way to ship departing for France but what used to be a point of no return offers some choice to these young Africans. Something is holding Mory back, an alluring vision of Africa, albeit one being dragged to the slaughter.

Anta, on the other hand, continues on. It’s a wordless split and quietly heartbreaking. The isolation is glaring, foreshadowing the loneliness that awaits her, in addition to the right to be regarded as a second class human being. She wanders the deserted deck of the ship alone as Mory sprints away yearning for the broken remnants of society he retains some nostalgia for. These remnants are embodied by his motorbike with an ox skull mounted on it – a symbol of the cross between rural and urban, industrial and subsistence. He seems to regard them as equal and balanced but one seems to have already devoured the other.

There is a cruel irony in Anta’s arch. Early in the film, we learn she has some degree of consciousness considers herself a revolutionary. But she has been side-tracked from the cause by her relationship with Mory, to the scorn of her comrades in university. She should be eternally cynical of the West but she is ready to embrace it because she has succumbed to a disillusion that corresponds to the sentiment of tons of young Africans. There is nothing but poverty around her and she desires whatever change is afforded her, even if the price is excruciating isolation from her home and even her love.

Mambety doesn’t dwell on this next point but It’s clear the government has dropped the ball and is trapped in the vice grip of neocolonialism. He doesn’t show any greedy officials or eroding education. We feel it. Some of us may have lived it. To fund their trip abroad, one of Anta and Mory’s plots is to steal the proceeds from a wrestling meet. These proceeds are to be funnelled into a memorial for General de Gaulle, when I’m pretty sure the community could have done with some more potable water. Why a monument to pander to your coloniser after your liberation is deemed prudent, I’ll never know. But it’s the scar of an asinine lack of awareness and misplaced priorities that is yet to fully heal. 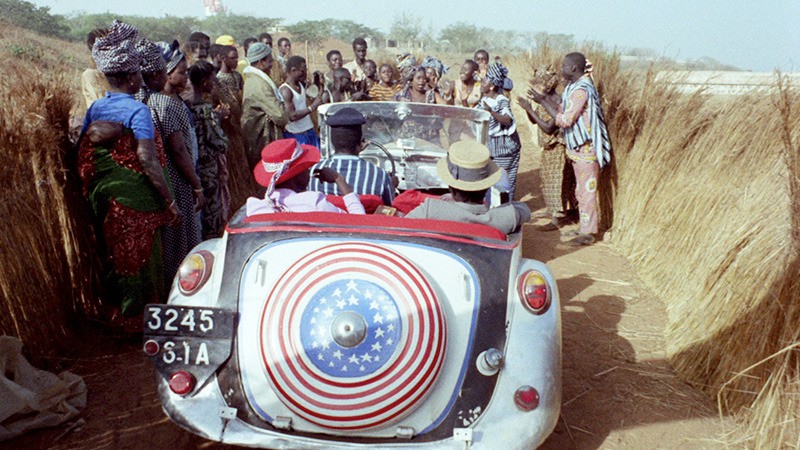 This pandering to the West filters to the lower rungs of society as evidenced by the grand parade and celebrations laid out for Mory and Anta after they strike gold following their one successful heist. In a sequence that dithers between reality and the surreal, they are treated like the vanguard of a victorious independence struggle as they flaunt their newfound wealth in a luxury car adorned with the stars and stripes of the American flag. They finally have some worth in the eyes of the community, which previously chided them as no-gooders, when they drown themselves in foreign totems.

When it’s all said and done, it never feels like Mambety retains any hope. Cynicism reigns supreme in the hyena’s world. Dare I say a certain a certain resignation lingers too, and you can’t fault him because this four-decade-old film remains chillingly poignant for most of sub-Saharan Africa. Sembene hoisted up his socialist banner of consciousness and resistance at the end of his films. Mambety has his characters turn away from revolutionary socialist ideals to Western capitalist draws. It speaks to a certain internalised apathy that has us seek comfort behind our degrees or high barbed-wired walls, like the flamboyant gay man who is eventually the victim of the con-artisty/theft from the poverty-stricken Anta and Mory. Even having the police as his private security can’t help him.

We pursue an agency anchored Western ideals, wealth and communal adoration. But Mambety seems to tell us it’s all for nought. We are still left with a broken ox skull in our hands. A big fear of mine, after musing on Touki Bouki is that things may never change and that Mambety’s 1973 vision of Africa will prove true for all time. Truth be told, we’ve done very little to prove him otherwise. I pray for the day comes when this film becomes nothing more than a history lesson.

Lover of the bleaker pleasures of cinema... and some good trash. View all posts by Delali Adogla-Bessa