Ana Lily Amirpour’s brilliant indie debut feature, A Girl Walks Home Alone at Night, was to die for. Tagged an Iranian vampire western, the 2015 film served up a flawless pastiche dish and a delightful convergence of differing periods and genres of cinema. Her follow-up, The Bad Batch, sports a bigger budget, high-profile names, an arresting aesthetic but a limp narrative.

The titular bad batch, to an extent, seems to be a population of pariahs of which the latest member is Arlen (Suki Waterhouse). In the film’s opening scene, she is tossed out of US jurisdiction into an arid Mexican purgatory with only a sandwich and a jug of water. The predatory nature of this setting is enforced when she is abducted by persons from a cannibal encampment called The Bridge. Before we know it, Arlen is chained up and an arm and leg sawed off for the night time barbeque as All that She Wants sounds from a nearby radio. Nasty, but immensely alluring.

More details to The Bridge are revealed and we notice some other chained up victims with missing limbs looking on with disquieting resignation juxtaposed to the hoard of full-bodied buff men and women members of the camp working the metals. The Bridge looks like it was started in the wreckage of a plane crash or a junkyard, fitting in with this wasteland. We also meet its leader, the beefy and tatted Miami Man, played with some ominous intensity by Jason Momoa. He sips on a soda and satisfied with the predatory culture he oversees as an American flag hangs in the distance. 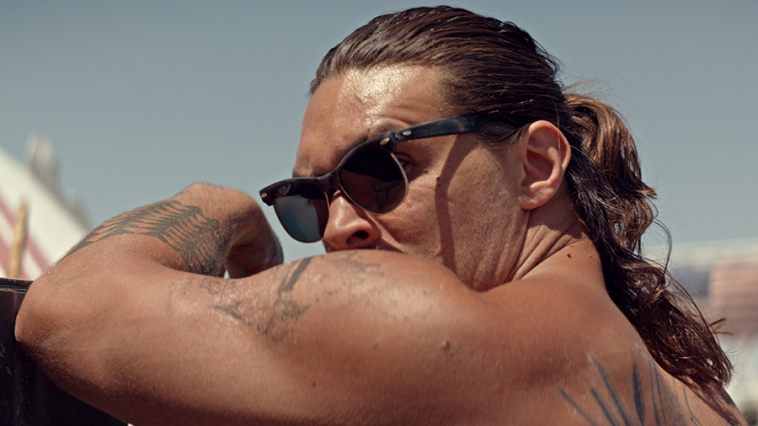 This is, however, a culture Arlen will not be consumed by. With some grit and ingenuity, she escapes this cannibal commune into the desert. With the help of a worn out hobo who scavenges the desert (an unrecognisable Jim Carrey) she finds her way to another camp called Comfort, telegraphed earlier in the film as a place of dreams, but mainly a place of dreams for people like Arlen – abused, vulnerable, diseased and unwholesome, where at the very least they don’t end up as dinner. It’s a terrific first 20 minutes or so.

It feels like the stage is being set for a rugged arthouse revenge thriller, especially so when five months down the line, Arlen steps out of the security of Comfort, with a prosthetic leg and armed with a revolver high on the pain of being stripped of her wholesomeness. Unfortunately, we do not get that. Amirpour steers the bad batch onto what wants to be thoughtful waters, challenging us to look beyond the surface and to process ideologies that define the world she creates. Unfortunately, these waters are rough and annoyingly tepid, devoid of the coherence needed to justify its resolution.

In the desert, Arlen steps into the cycle of violence, when she runs into and kidnaps the Miami Man’s daughter (in a scene with controversial fallout) and takes her back to Comfort. I guess this is done out of sympathy but the screenplay seems to avoid critical and more uncomfortable moments that paint a better picture of Arlen, compromising this particular thread. But at least the girl ends up with a cute bunny; a conduit for some symbolism later on. The Miami Man now seems to feel loss for the first time in a while as he grabs a couple of bladed accouterments and ventures into the desert in search of his daughter.

The Bad Batch wants to tout the virtues of humanity, which is commendable. However, when you spend a brilliant 20 minutes enforcing a spectrum of savagery and violence, certain character shifts become too hard to swallow. The whiplash really begins Arlen wanders back into the desert again, this time high on drugs, and she runs into the Miami Man. She starts to warm to him and Amirpour seems to want the audience to do same. I don’t know about most people but for me, murderous cannibals, even with missing children, are still abhorrent. Our director thinks too much of us.

Amirpour spices her film with visually striking but sometimes-ponderous sequences which sometimes hurt pacing. The unengaging desert landscape becomes more of some dull vacuum of passage rather than some force to take into consideration. The pop soundtrack mostly flies over my head. I couldn’t say if there was some poignancy to the track selections. As Karma Chameleon plays, the Miami Man seems to tell us he has no problem spending quality time with his daughter one minute and carving up a woman, who begged to the death, for supper the next.

The characterisations The Bad Batch offers have some substance, for the most part. Arlen works as a lost soul, trying to look beyond a physical wholesomeness, to something more poignant. She fits in with the motif of silence this film presents sporadically. Whether when she finds her “one thing”, the audience will be on board is another matter. Momoa’s accent as the Miami Man needs some getting used to but there is some fascination in the idea that he became an undesirable because of his illegal immigrant status from Cuba – more so because of the American flag flying above The Bridge.

The hobo Carrey plays has an almost a spectral or angelic presence looking to nudge persons in the direction of their desires. The likes of Giovani Ribisi add to the aesthetic of erosion and neglect, though a little more restraint to his unhinged character was in order. Diego Luna also shows up as a 70’s incarnation of David Guetta and deejays one hell of revelry in Comfort. It’s good to see Amirpour is well liked and connected to actors willing to go all out in whatever spurts of screen time the script grants them. The Bad Batch is richer for it.

Keanu Reeves and his thick mustache steal the show as this immensely amusing cult-like leader of Comfort. He is referred to as The Dream and he comes across like a thaumaturgical preacher or some third world politician. The separation accompanying same is evident. We see him for the first time at a rave backed by entrancing electro-house music and lit with neon glows. It’s almost like a political rally. He riles up the inhabitants of Comfort to embrace their status as undesirables, whilst flanked by a militia of pregnant girls. What follows is a communion of psychedelic drugs – an expertly realised sequence.

It’s a credit to Amirpour that The Bad Batch offers a chunk on the periphery that makes multiple viewings a must for lovers of cinema. There is so much to gratify our eyes as Amirpour’s glorious energetic punk sensibilities are on full show. But the denouement is bizarrely unfulfilling in its ostensibly fantastical reaches. Despite being such a daring filmmaker, she falls into the most mundane pitfalls – style over the substance that would have kept the gears in our mind spinning.

Lover of the bleaker pleasures of cinema... and some good trash. View all posts by Delali Adogla-Bessa