Guardians of the Galaxy Vol. 2 presents a Marvel antagonist that does not want for depth – It’s been a while since such a rare sighting and weird this point is one of the takeaways from this MCU space opera. I was almost starting to come to terms with the fact that maybe, just maybe, Marvel is not too keen on presenting complex villain in its PG-13 fare. My general experience with the MCU is something akin to a reading of a Christian review of a film that elicits empathy for a tortured antagonist, with the critic making it a point to note disapproval of a character residing in grey areas.

The surprise of a competent villain was welcome, but even more surprising was how well this film will work as a Fathers’ Day bill. No, I’m not calling it The Road or The Bicycle Thief, which are reserved for the Fathers’ Day nights where you just feel like soaking your pillowcase in tears. Guardians Vol. 2 will be perfect family entertainment, with the laughs and cheers aplenty amidst a cacophony of dazzling colour and vintage tunes, I admittedly cared little for. There are tears too as James Gunn returns to helm this sequel as he builds superbly of its 2014 predecessor, if not outrightly being better than it.

The story begins with our crew comprising, Peter Quill (Chris Pratt) still in space pirate mode with a dash of Parks and Recreation, along with the ever stern Gamora (Zoe Saldana), the snarky Rocket Raccoon (Bradley Cooper), the unfiltered Drax (Dave Bautista) and the adorable Baby Groot who has the mind of a baby, and that surprised me for some reason. He isn’t being treated like a baby though, given the team throws him in, or rather leaves him to dance his way through the thick of an intense and visually entrancing battle with a giant octopus as the group puts in work early on for a conceited race of gold plated beings, the Sovereign, to live up to their mandate of guardians of the galaxy.

They are charged to defend some valuable battery terminals from the octopus monster and their reward for their eventual success; Gamora’s cold blooded sister Nebula (Karen Gillan), last seen ripping off her own bionic arm. Almost a good day’s work till Rocket decides to steal some of the valuable batteries leading to the group incurring the wrath of a whole race. The brouhaha with the Sovereigns feels like a side show for the most part. They end up contracting the blue-skinned Yondu (Michael Rooker), who has issues of his own within his own Ravager ranks, to find Quill and his gang. These issues escalate when it becomes clear Yondu has an affinity for Quill, to the disdain of his space pirate crew. Yondu is a marker of the film’s triumphs in character with a such surprisingly layered arc.

The story really gets going when a digitally de-aged Kurt Russel shows up as the enigmatic Ego, a celestial who is apparently Quill’s long lost father. Quill eventually travels to Ego’s Eden-like home planet with Drax and Gamora whilst Rocket Raccoon, Groot and Nebula (Karen Gillan) are left to deal with Yondu’s team who are on the hunt. As a 90s kid, seeing Russel in back to back big budget blockbusters, after the Fate of the Furious, fills me with such warmth. A bet on same would have been unwise a few years ago but here we are. Russel’s Ego presents the central conflict here as he aligns Quil on a path that would have him choose between blood ties and his comrades.

Family really is the central theme here, much like the Fast and Furious films, but in a more substantial way with more emotional resonance. Some characters seem to be searching for a sense of belonging, like Yondu who is hurting from being exiled from the massive network of Ravagers or the depth added to Nebula which elicits some audience sympathy and sheds some light is shed on her rivalry and tortured childhood with Gamora. There is a fatherhood angle for Quill that weights the promise of an almost fantastical life with Ego and the reality of his rough bond with his Yondu who slowly begins to come off as a truly compelling father figure.

Basically, the whole main cast gets some solid development, with Pratt barely standing out as the leading man. Quill and Gamora are getting there, but Gunn is holding off on any serious romance. It’s bold of the script to leave Quill playing celestial catch with Ego as Gunn focuses on Yondu psychoanalysing the self-destructive Rocket or on Drax who watches the silky sunset with newcomer, Mantis (a cohort of Ego played by Pom Klementieff) as we are reminded of the pain that resides in his past. Gunn seems to suck us in expertly into some of these quite moments that seem detached from this mammoth production. You get the sense he wouldn’t mind the challenge of making the third instalment on an indie budget.

As usual, a chunk of the budget goes into the loud crowded fight sequences with the usual CGI overdose and lacking tact. I didn’t care for them and Gunn probably didn’t either. He seems to favour these incredibly humorous asides during massive set pieces, like the tracking of the dancing Baby Groot in the opening battle or the hilarious sight of Rocket and Baby Groot waiting for the most mundane of household items as the intense final battle rages on meters away. More simplicity stands out in the amount of detail milked from almost throw away parts of the film like brothel like establishment with android working girls which would fit in a more colourful Blade Runner film. 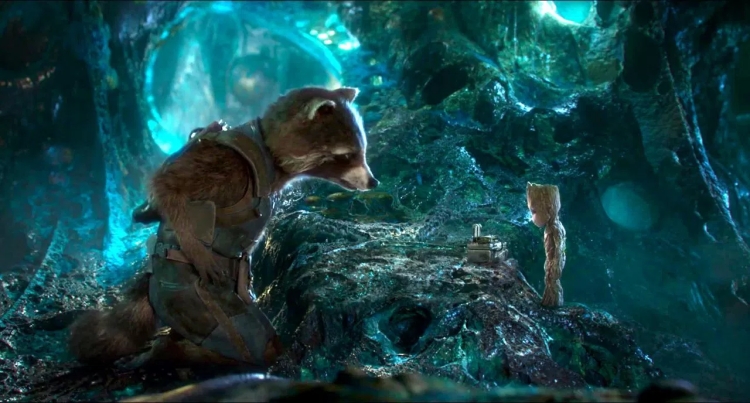 All these positives in Guardians Vol. 2 feel like bonuses given we find ourselves doing a lot of settling when it comes to these big budget flicks. Ultimately, I feel Guardians Vol. 2’s success lies in Gunn establishing it firmly as a comedy. The tone remains consistent to this with a terrific gag lying behind every corner and in every crevice. Drax was the best thing comedy wise in the first film and his unfiltered takes do some heavy lifting but he is given a run for his money by Baby Groot who is cute and hilarious in equal measure. The uptight Sovereigns and their ridiculous arcade style battle room are great to laugh at. Forgive me if this is a spoiler, but watch out for the Mary Poppins gag – a funnier joke this year will burst my lungs. But Taserfase though – not that funny Mr. Gunn.

I wish Guardians Vol. 2 had been bold enough to embrace what it truly was and ridden on solely on the character, comedy and space adventure elements. It tries to ramp up the stakes to galactic proportions and it all feels forced and dumb, to be honest. I know our guys are indeed called the Guardians of the Galaxy but I would have been perfectly fine if only their lives were at stake.

Nevertheless, brace yourself for an inspired thrill ride that compromises on little else. There is tons of fun, rich character, great humour and still some sense of wonder as we get deeper in with this franchise. There are a number of enjoyable cameos that make you ask just where this franchise is expanding to. I wish the powers that be would allow Gunn to just coil into something more minimal. Bits of the film feel like a cry for help as Gunn probably tells us there is such a thing as too much money.