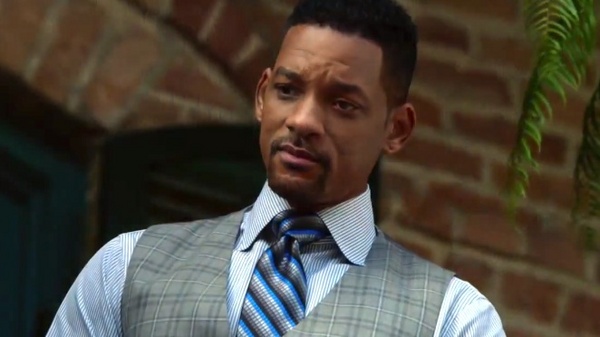 In the build up to Focus, I was weirdly pondering over the fact that Will Smith had never hooked up with a Caucasian woman onscreen before unless I am mistaken. He’s checked the African and Latin American box and maybe here Margot Robbie would offer him the opportunity check another box. All drivel of course but it just speaks to the surprisingly poor marketing preceding this film helmed by these two stars. Focus really is about the con world but the posters look like Hitch2 but it really is a film about the art of the sting and the con and we watch as they take down various marks but I feel the films main mark here is the audience.

This caper, co-written and directed by Glenn Ficarra and John Requa, gives us what I hope is a largely fictional and extensive in to the world of the con artist through Nicky (Smith) and Jess (Robbie). Jess is a small time conman with potential looking to move up in her trade. Nicky is the veteran con artist at the top of his trade and Jess hopes he can be her route to the big time and begs him to teach her everything he knows and he does probably the next best thing teaching her about focus whilst furtively picking her possessions of her. Their relationship starts with a con and ostensibly stays that way till the very end as they try to outsmart and use each other on different occasions. Trust suddenly becomes scarce commodity which is to be expected since we are, after all, dealing with con men.

We next find ourselves in New Orleans for the Super Bowl(???), where Nicky and his massive network troop to this hub of activity much like groupies and he reluctantly lets Jess join his massive team as they proceed to steal anything from unsuspecting travelers or tourists or anyone really who blinks. All this is done in quite impressive and amusing fashion as the film reaches a beautifully edited high. Jess plays her role seamlessly with body to distract and the light touch to execute but the question remains – when are she and Nicky going to hook up? There is a semblance of romance which neither we nor the duo involved trust and in truth, the film tries it’s best to make it difficult to for us to trust it. The NFL game its self provides what the film thinks is a heavy sequence playing on Nicky’s gambling habits but this section of the film lacked finesse and is woefully telegraphed but wait, we still have about an hour to go so what does this film have in store?

The film travels to Buenos Aires three years later were Nicky is running another scheme involving a Formula 1 type circuit which involves duping the competitors of a wealthy race-team owner. It’s almost a sequel to the stuff in the first part of the film and by law sequels are generally worse than their predecessors. The film largely coasts on the performances of its cast with Robbie and Adrain Martinez (a member of Nicky’s) team providing what felt like improvised but solid moments of humor and Gerald McRaney shows up as a suspicious head of security to chew on some amusingly gruff and scornful lines stealing most of his scenes. Smith is Smith and brings the envious body (I do believe he’s pushing 50) and the charm we know him for but he ultimately just adds to the general theme of style over substance. The relationship between Nicky and Jess should have brought the depth but that emotion and development we need to become invested doesn’t pop up because the film is more interested in the capping the con with an exclamation mark.

Focus wants to draw us in but doesn’t have the confidence to let us in on the game like say an Oceans movie. We are ultimately the films main mark, not the Chinese gambler, not the oblivious commuters, not the F1 owners – us. The film surprisingly doesn’t drop a lot of egregious contrivances but it is loaded to within an inch of its life cheap twists that put me off. Robbie and McRaney show up to give the film some timely mouth-to-mouth but I still feel the film ties it’s self in a knot and falls flat.