The last time, I was moaning about how Christian movies were basically rubbish and how they reveled in their mediocrity and use of the Gospel as an excuse for second-rate end product. I also touched on how the characters presented to us were almost always boring and one dimensional.

I’m all about being gripped by well written and well conveyed characters. An outstanding narrative is somewhat of a bonus for me. It’s all about the personalities. I get enough of the gospel from my own readings so I really don’t watch those films for their age old messages. I’m looking for characters to connect with and Characters I believe are real but of course we don’t get that. We are stuck with characters in the mould of the guys from WWJD.

What should a good Christian character exemplify? Must he be a model believer? I don’t think so. Must he have a redemptive denouement? Not necessarily. Must he be human? For damn sure. It all comes down between God and our desires, It’s something we are stuck with because well, we’re all human, we have Adam and Eve to thank for that. I  look around at the average believer and even myself and see a struggle between our dire human nature and a new being and truth be told not every Christian will win that conflict.

Mainstream Hollywood directors and screen writers have managed to crack the Christian persona though. Think Robert Duvall in The Apostle or Benicio Del Toro in 21 grams. Characters like these got the underlying message across through the individual’s personal struggle without leaving you feeling judged and made you step back and give some good thought to your faith. Of course there are those showings which are outright comic caricatures but I do get good laughs from those.

First up is Paul Dano as Eli Sunday from There Will Be Blood. This depiction is probably every cynic’s perception of an overly charismatic preacher man and with some of the stuff we see in the tabloids, who would begrudge them. Eli is an evangelical preacher whose real goal it seems is to extract money from Oil prospector, Daniel Plainview, to build his church which he calls the “Church of the Third Revelation”. He is bent on public recognition and we see this early on when he requests to give some public blessings during the inaugural drill at the oil well in their community. To me, He captured the modern day charlatan prophet; vane, money centred and woefully misguided. At the end he comes off as nothing but a two bit con man. Having him die at the hands of the God-like Plainview seemed a just end for his deeds as he appeared to receive his rightful punishment and serves as timely reminder of what judgment lies in store for con preachers. Dano is very convincing in this role. It felt like a Saturday morning on Metro TV. I felt Dano didn’t get the acclaim he deserved for his outing. His performance went somewhat under the radar because of the mammoth that was Daniel Day Lewis but he’s a talented young man and he’ll definitely get his time in the limelight

Next, Meryl Streep’s Sister Aloysius Beauvoir in Doubt which I might add is one of my all-time favourite films. Doubt is very character driven story of the search for justice and the truth. Streep here is an upright and somewhat uptight principal of a catholic school and she starts to get hints of a not so appropriate relationship between a priest and one of the students. She then turns into a woman with a mission to expose the priest and let justice prevail. However at the end of the movie when all words have been said and decisions taken, she confides in her fellow sister saying “I have doubts”. 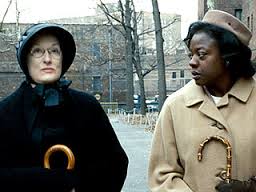 I got the sense that her doubts came not from her suspicions concerning the priest but whether the right thing, or Gods will for some of us, in the general scheme of things culminated in good and joy for everyone involved. The pivotal moment in this film for me was her meeting with Mrs. Miller (big ups to Viola Davis there) where the situation is laid bare and the realization that the right thing may not be the best option for everyone. It seems like a simple idea to work with but its execution in the movie was almost flawless thanks to Mrs. Miller’ character embodying the numerous gray areas Christian deal with. The film also subtly toys with the idea that we sometimes move away from God in the quest for what is just, something I’ll think on. 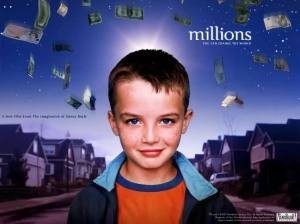 Danny Boyle’s British film, Millions presents us with the little Damien Cunningham, a good-natured boy who isn’t your average 10-ish year old, he has a tendency to hallucinate Saints. These holy figures come to him in visions, often during his playtime, inspiring him to adopt their selfless natures for his own life. While he is having a chat with the patron saint of television one afternoon, a bag of money falls from the sky and lands right next to him. Convinced he has just encountered a miracle, he excitedly shows the bag to his brother Anthony. While Damian wants to give the money to charity and help save the world, Anthony, the more capitalistic of the two, is determined to spend the money on nifty gadgets and investments. One of the more interesting bits in the film is Damien’s banter with saint Peter where they discuss Jesus’ feeding of the 5000 and gravity of the miracle is downplayed by Peter and he rather chooses to throw light on the little boy who offered to share his 5 loaves and 3 fish and his act of faith in Jesus and pure deed of love and kindness which he calls the true miracle. The films use of Damien was a direct nod to Jesus saying we need to accept Gods kingdom with the simplicity of a child and  that’s what it comes down to. Damien being child approaches everything simplistically without second guessing simple commands from the bible. I loved seeing him go stuff money in the Mormons mail slot in the dead of the night(well not really) just because he thought they were poor and was just doing his Christian duty by sharing. Why cant we all stay so young?